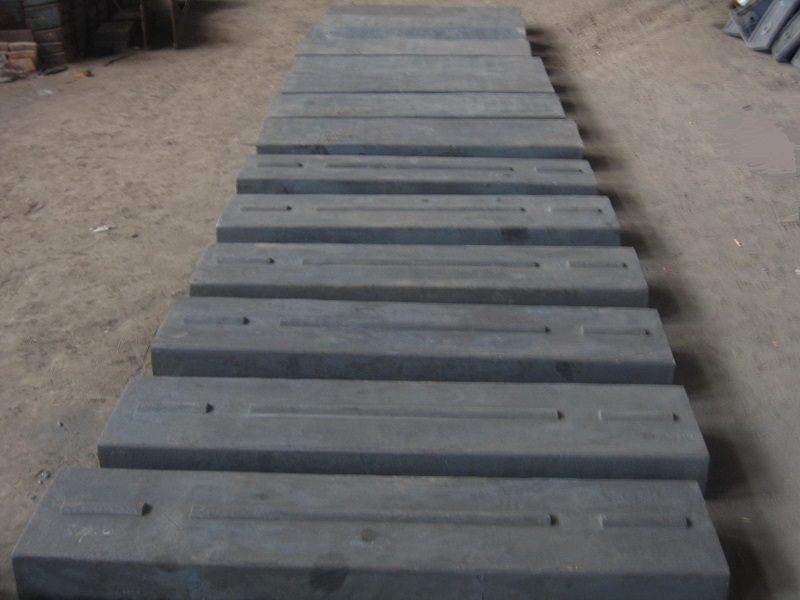 Large impact crusher has the advantages of simple structure, large crushing ratio, and high efficiency. It is widely used in mining, cement, metallurgy, electric power, refractories, glass, and chemical industries. The blow bar is one of the keys and easy-to-wear crusher wear parts of the large impact crusher. It is fixed to the rotor of the crusher with a wedge. When the crusher is working, the high-speed rotating rotor drives the blow bar to impact the broken ore at a linear speed of 30 ~ 40m / s. The ore block is less than 1500mm, the wear is very serious and the impact force is very large. Abrasive and impact resistance.

Carbon is one of the key elements that affect the mechanical properties of materials, especially the material’s hardness, and impact toughness. The hardness of the material increases significantly with increasing carbon content, while the impact toughness decreases significantly. With the increase of carbon content, the number of carbides in high chromium cast iron increases, the hardness increases, the wear resistance increases but the toughness decreases. In order to obtain higher hardness and ensure sufficient toughness, the carbon content is designed to be 2.6% ~ 3.0%.

Chromium is the main alloying element in high chromium cast iron. As the number of chromium increases, the type of carbides changes, and the form of carbides transitions from MC3 to M7C3 and M23C6. Among carbides, M7C3 has the highest hardness, and the microhardness can reach HV1300 ~ 1800. As the amount of chromium dissolved in the matrix increases, the amount of retained austenite increases and the hardness decreases. In order to ensure high wear resistance, control Cr / C = 8 ~ 10, a larger number of broken mesh M7C3 eutectic carbides can be obtained; meanwhile, in order to obtain higher toughness, the chromium content is designed to be 25 % ~ 27%.

Part of molybdenum is dissolved into the matrix in high chromium cast iron to improve hardenability; part of it forms MoC carbides, which improves microhardness. The combined use of molybdenum, manganese, nickel, and copper will provide better hardenability for thick-walled parts. Because the blow bar is thick, considering that the price of ferromolybdenum is more expensive, the molybdenum content is controlled from 0.6% to 1.0%.

Nickel and copper are the main elements of the solid solution strengthening matrix, improving the hardenability and toughness of chromium cast iron. Both are non-carbide-forming elements, and all dissolve into austenite to stabilize austenite. When the amount is large, the amount of retained austenite increases and the hardness decreases. Considering the production cost and the limited solubility of copper in austenite, the nickel content is controlled between 0.4% and 1.0% and the copper content is controlled between 0.6% and 1.0%.

Silicon and manganese are conventional elements in high chromium cast iron, and their main role is to deoxidize and desulfurize. Silicon reduces the hardenability but increases the Ms point. At the same time, silicon hinders the formation of carbides, which is conducive to the promotion of graphitization and ferrite formation. The content is too high, and the hardness of the matrix is greatly reduced. Therefore, the silicon content is controlled between 0.4% and 1.0%. Manganese expands the austenite phase region of high chromium cast iron, solid-solves in austenite, improves hardenability, and reduces martensite transformation temperature. As the manganese content increases, the amount of retained austenite increases, the hardness decreases, and the abrasion resistance is affected. Therefore, the manganese content is controlled to 0.5% to 1.0%.

S. P is a harmful element, and it is generally controlled below 0.05% in production. RE, V, Ti, etc. are added as composite modifiers and inoculants to refine grains, purify grain boundaries, and improve the impact toughness of high chromium cast iron.

The chromium blow bar drawings, weight:285kg, the size: see the following. To ensure the installation requirements of the blow bar, the plane bending deformation of the blow bar is ≤ 2mm. As the surface of the blow bar is extremely high, there must not be any depressions or protrusions. To ensure the denseness of the casting, we use high-strength resin sand molding with a linear shrinkage of 2.4 ~ 2.8%.The cross-section ratio of the gating system is designed according to ΣF inside: ΣF horizontal: ΣF straight = 1: 0.75: 1.1 It adopts horizontal molding and inclined pouring, and at the same time assists the heating and temperature riser and direct external cooling iron. The process yield is controlled at 70% ~ 75%.

During the trial production process, we have adopted the three modeling processes of Figure 2, Figure 3, and Figure 4. After casting and grinding, it was found that the hammer produced by the process of Figure 2 and Figure 3 has different degrees of surface depression and bending deformation. The method of increasing the riser can not eliminate the surface depression and bending deformation, which fails to meet the installation requirements. Based on the summary of the trial production experience of the molding process in Figure 2 and Figure 3, we decided to use the horizontal molding inclined pouring molding process shown in Figure 4. The surface of the hammer after casting and grinding has no depression and bending deformation, and the deformation is ≤ 2mm. Meet installation requirements. The specific production process is as follows: After the sand mold is made horizontally, one end of the sand mold is lifted up to a certain height to form a certain tilt angle. (In actual production, the angle of the sand mold is generally determined according to the shape, weight and structural characteristics of the casting. The inclination angle is generally controlled between 8 ° ~ 20 °). The molten iron is introduced from the gate, and the molten iron first enters the cavity to reach the lowest point. It is first solidified by the chilling effect of the externally cooled iron. Under heavy pressure, the riser reaches its maximum when it is filled with molten iron, and the riser finally solidifies to achieve sequential solidification, thereby obtaining a casting with dense structure and no shrinkage. 1000kg medium frequency electric furnace (quartz sand furnace lining) is used for smelting production. Limestone + broken glass composite slagging agent is added before smelting. After most of the charge is melted, slag is removed, then ferrosilicon and ferromanganese are added to deoxidize, and aluminum is inserted at an amount of 1kg / t After final deoxidation, the wire is discharged from the furnace and the melting temperature is controlled between 1 500 ° C and 1 550 ° C.
In order to further improve the comprehensive abrasion resistance of the plate hammer, we improve the morphology of carbides of high chromium cast iron through composite modification and inoculation treatment processes, reduce inclusions, purify molten iron, refined grains, and enhance the consistency of cross-section structure and performance of thick and heavy castings. The specific operation is: preheat the ladle to 400 ℃ ~ 600 ℃, add a certain amount of Re-A1-Bi-Mg composite modifier and V-Ti-Zn composite inoculant into the ladle before pouring, and pour molten iron After the slag is sprayed, the residual slag is quickly aggregated to further purify the molten iron, and at the same time, a thermal insulation coating is formed to facilitate casting. The molten iron is sedated for 2 to 3 minutes, and the pouring temperature is controlled between 1380 ° C and 1420 ° C.